The Guyon estate is situated on the main road (RN 74) as you head into Vosne Romanée. Jean-Pierre and his brother Michel have been running the estate since 1991 and are currently the 3rd generation of the Guyon family.

I met Jean-Pierre on a Wednesday evening at 6pm for an initial chat and to try some of his wines. I didn’t expect to leave 3 hours later having tasted 2013 vintages in the barrel, 2012 in pre-botttling tanks and 2011 from the bottle! I was also in the proud possession of the last third of a bottle of 2011 Grand Cru Ezecheaux, which Jean-Pierre suggested I share at home with my wife…

The village of Vosne Romanée is home to 6 Grand Crus, including the “inimitable” Romanée Conti! It also boasts such prestigious estates as DRC, Leroy, Gros, Lamarche, Liger Belair, Georges Noellat…

Jean-Pierre Guyon is a quiet, conscientious wine maker in his late 40’s. He is typically “discreet” as are most Burgundian estate owners…their famous addage: “live happy, live hidden” rings true once again. Nevertheless I have come here to discover more about this mythical village and one of its highly repected estate owner/winemakers.

His philosophy for making wine is that of someone conscious of the role of the “terroir” and the necessity to respect natural cycles of vegetation by using natural products to cultivate and vinify wines. That is why all his wines are certified “Organic”.

Jean-Pierre’s wines are of a traditional style, with plenty of oak – that gradually steps aside to let the “finesse and elegance” show through. In the early 2000’s people considered them to bit a little too oaky and four square…but for Jean-Pierre, it was just a question of patience. He always knew what he wanted to achieve – full-bodied and well-balanced wines that reflect the terroir – and how he would get there.

J-P believes that the hardest and most important work has to be done in the vineyards and if that is done correctly, then life is much simpler in the “cuverie”. He therefore spends plenty of time in his different vineyard plots, seeing how the vines are coping with different weather conditions and intervening when necessary. According to Jean-Pierre, vines are like humans and need to be nourished correctly in order to be healthy and productive.

I was very impressed by the early structure and balance in the barrel-tasted wines. Although the 2013 vintage was seen as being a difficult one for the wine makers, Jean-Pierre told me he has never enjoyed himself so much and the challenge of making great wine out of an average harvest was a wonderful challenge to be met. The proof is in the tasting. Each wine tasted, whether from Vosne, Gebrey, Nuits, Savigny or Chorey has its own identity. Despite their youth (5 months in barrels) there was great structure, aromas and complexity. Once we had gone through the 2013 barrels and 2012 vintage (pre-bottling), Jean-Pierre invited me to try the Chroey-les-Beaune – still in the barrel. You would think it a little risky to try a village appellation after a Grand Cru Clos de Vougeot – but you are wrong. It tasted delicious. You could see the contented “told-you-so” smile on Jean-Pierre’s face.

The 2011 tasting include a Savigny-les-Beaune 1er Cru Les Peuillets. A very classy wine, with a great blending of oak and herbs. Great balance and plenty of energy.

The 2011 Vosne Romanée Charmes des Maizières was still a little closed up but more fruit-forward than oaky. Plenty of balance and length.

The 2011 Echezeaux Grand Cru was both floral (roses) and fruity with a slight smokiness, very fresh with a slight hint of minerality.

All the 2012 pre-bottled wines were fantastic and living up to the 2012 expected potential and the 2013 vintage in barrel, was the sign of a great craftsman. 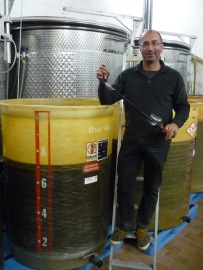